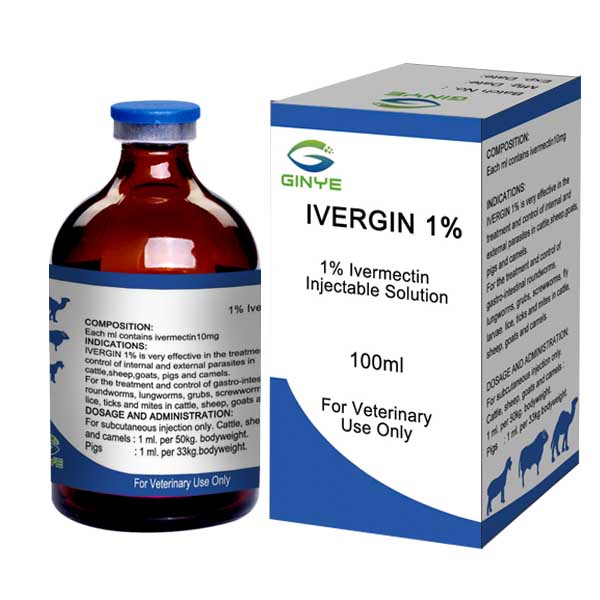 Compared with other animals, the harm of cattle and sheep parasites is very serious and a worldwide problem. No matter whether it is family farming or modern pasture, no matter how well you manage it, how advanced the equipment is, and you also regularly deworm you, there are still varying degrees of parasite infections.

STORAGE:
Store in a dry, dark place between 5 °C and 25 °C.
Keep medicine away from children.

How to use ivermectin to deworm cattle and sheep?

Compared with other animals, the harm of cattle and sheep parasites is very serious and a worldwide problem. No matter whether it is family farming or modern pasture, no matter how well you manage it, how advanced the equipment is, and you also regularly deworm you, there are still varying degrees of parasite infections. It can be seen that the survival ability of parasites is beyond your imagination.

Misunderstanding of parasites in cattle and sheep
1. One-sided view that parasites are not harmful and do not pay attention to them;
2. Improper choice of drugs, do not know what drugs to use for prevention and treatment;
3. The control plan is not perfect, and there are no plans for many pastures.

Types and selection of deworming drugs for cattle and sheep parasites
1. Organophosphate lipids: low-toxic organophosphorus compounds. In the past, they were commonly used as insecticides and anthelmintics, mainly including trichlorfon, dichlorvos and coumaphos. Among them, trichlorfon is widely used as a broad-spectrum anthelmintic, which mainly repels nematodes in the digestive tract (roundworms, trichodonta nematodes, and esophagus mouth nematodes). External use can kill ectoparasites (mites, lice, fleas and ticks, etc.). Dosage: 80-100mg/Kg body weight for mixed feeding, rubbing or spraying at 1% concentration for external use. The withdrawal period is 7 days.

Side effects: high toxicity and narrow safety range; excessive use is forbidden; pregnant female animals and patients with gastroenteritis are prohibited; cannot be used in conjunction with alkaline drugs-such as trichlorfon and baking soda chemical reaction, generating more toxic dichlorvos .

Shortcomings: The toxic and side effects are relatively large, and the deworming effect is not ideal. In recent years, the number of users has gradually decreased, and it has even been abandoned.

2. Imidazole: synthetic broad-spectrum insecticides for contact external use, mainly dimethicone, which is a crystalline powder and is almost insoluble in water, so it is often used as an emulsion application, such as Yifenjian (Amitraz EC ). It mainly eliminates ectoparasites such as mites, lice, fleas, ticks, flies, etc., and can affect the vigor of the eggs, is harmless to humans and animals, and can be used with confidence.

Usage and dosage: spray, hand spray, medicated bath, etc. Make a 0.05% solution for use on the carcass and the floor and walls of the livestock house. Withdrawal period of 7 days

Side effects: The injection has a certain irritation to the local area and can cause symptoms such as lack of energy, salivation, and coughing. Counter-effects: If you are infected with lungworm and posterior strong nematode, salivation and coughing will help the body to discharge; a small amount of use can improve the immunity of the animal.

4. Benzimidazoles: broad-spectrum, high-efficiency, low-toxicity. Mainly include: albendazole (albendazole), anti-venom, fenbendazole, mebendazole and so on. In clinical use, it is often made into compound preparations, and the most common is to mix albendazole and ivermectin to make compound preparations. This kind of anthelmintic has a repellent effect on many nematodes, trematodes and tapeworms, and also has an inhibitory effect on the hatching of eggs.
Usage and dosage: 10-30mg/Kg body weight for oral administration. Withdrawal period of 14 days
Disadvantages: poor palatability. When mixed feeding, the drug should be added less each time, and the drug should be administered in multiple times. The drug may be teratogenic (not sure), and a large amount of continuous use should be avoided.

Macrolides: a new generation of broad-spectrum, low-toxicity and high-efficiency drugs that have a high repellent effect on parasites in and out of livestock and poultry. It not only affects adults, but also some larvae at certain stages of the development of nematodes. It also has a killing effect. Mainly include: avermectin, ivermectin, doramectin, apritol and so on. The raw materials of this type of medicine are mainly produced by Shandong Ginye Biotech Co., Ltd., and most of the raw materials needed abroad are provided by Shandong Ginye.

The parasites with the highest infection rate and the most serious damage in farms are roundworms and scabies. This kind of drugs can simultaneously repel and kill the internal and external parasites that are the primary harm to cattle and sheep, and has high practical value. At present, many farms, especially farmers, have misunderstandings in their knowledge or use technology, and deworming programs, etc., and there are misunderstandings in their knowledge and technology, so that this kind of ideal deworming drugs cannot give full play to its excellent effects. Therefore, I will focus on introducing

Introduction and use of ivermectin
1. Wide spectrum of deworming: At the same time, it repels and kills parasites inside and outside cattle and sheep. Repellent——Adults and most of the fourth stage larvae of roundworms, gastrostrongy nematodes, esophagus mouth nematodes, Trichinella spiralis, whipworms, hookworms, etc. and most of the fourth stage larvae, as well as lung nematodes (poststrongyloides), lungworms, and crown worms , Adults of kidney worms, etc., can kill nymphs and adults of scabies mites and blood lice, but it has no effect on the eggs of all parasites. Ivermectin cannot repel: tapeworms, flukes, colonic ciliates, coccidia, etc. It is precisely because ivermectin cannot repel this type of parasites, it is compatible with albendazole to make a premix. The two are used together to kill them.

2. Choose of drugs and deworming plan

Powder: The most widely used in the market is 0.25% ivermectin + 6% albendazole,
Injection: The most widely used injection is 1% ivermectin. The advantages of injections: high bioavailability, after subcutaneous injection, the drug can be combined with subcutaneous fat to have a slow release effect, not only can directly kill and treat the infected parasites, but also because the blood concentration is maintained for a long time. It also has the effect of repelling and killing the parasites in the later stage, which has the dual effect of treatment and prevention. Disadvantages: operation is more troublesome.