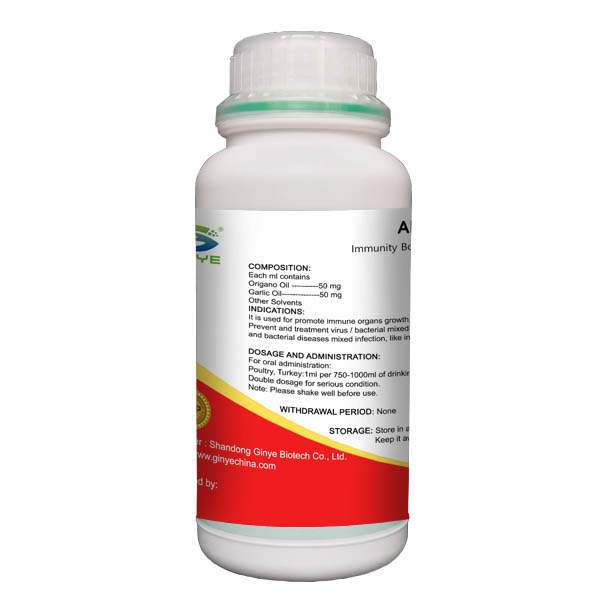 Oregano can extract the aromatic volatile oil-oregano oil. Oregano exerts its pharmacological effects mainly through oregano oil. The background information of “Phytochemistry and Plant Species” of the United States Department of Agriculture shows that oregano contains more than 30 antibacterial compounds.

DOSAGE AND ADMINISTRATION:
For Oral Administration
Poultry, Turkey:1ml per 750-1000ml of drinking water for 3-5 days
Double dosage for serious condition.
Note: Please shake well before use.

The role of oregano oil in animal husbandry

Oregano can extract the aromatic volatile oil-oregano oil. Oregano exerts its pharmacological effects mainly through oregano oil. The background information of “Phytochemistry and Plant Species” of the United States Department of Agriculture shows that oregano contains more than 30 antibacterial compounds. The Ministry of Agriculture of my country approved oregano oil premix as feed drug additive in 2001 (Nongmufa [2001] No. 20), which is mainly used to prevent and treat diarrhea caused by E. coli and Salmonella in pigs and chickens, and to promote the growth of livestock and poultry.

1. Application of oregano oil in feed
Oregano oil was approved for use as a feed drug additive in July 2001. The first product that appeared was Nobida from the Netherlands. Its effective content of oregano oil was 2.5%. Due to its high application cost, it is difficult to be used in ordinary Widely used in livestock and poultry feed. With the development of the feed additive industry, more additive manufacturers have successfully developed and mass-produced oregano oil additives, of which 5% oregano oil premix is the main (eg: Zhi Duoxing). With the development of oregano oil extraction technology and proportioning technology, and the gradual prohibition of antibiotics in feed, its cost-effectiveness as a feed additive has gradually become better, and it has begun to be used in ordinary livestock and poultry feed. Good results. At the same time, oregano oil has a broad antibacterial spectrum, does not produce drug resistance, has no residue in animals, does not require a withdrawal period, can be used for a long time, and has no compatibility with commonly used pharmaceutical additives. It is more practical and convenient.

Pastet et al. found that under hypoxic or anaerobic environments (such as the intestinal environment), oregano oil showed stronger activity against bacteria. Angienda et al. reported that in the presence of NaCl, oregano oil is more sensitive to E. coli and can prevent bacterial regeneration for a longer time. Conventional livestock and poultry feed generally contains 0.3%-0.8% salt. Salt can weaken the cell wall of bacteria and help oregano oil to destroy the cell wall. Therefore, the actual effect of adding oregano oil to the feed is better than the MIC tested in the laboratory. The value is better.

2. Application effect of oregano oil in poultry breeding
Oregano oil plays an important role in improving the carcass quality and growth performance of broilers. Chen Lihua et al. randomly divided 150 1-day-old Avian broilers into 5 groups, and added 75, 100, 125, and 150 mg/kg of 10% oregano oil premix to the basal diet. The experimental period was 42 days. The results show that oregano oil can significantly increase the weight gain rate of broilers throughout the whole period, improve the feed-to-meat ratio, and the average breast muscle rate and leg muscle rate are significantly higher than those of the control group.

3. Application prospects of oregano oil
Plant phenolic compounds have antibacterial activity. Among them, carvacrol and thymol have the strongest antibacterial activity. The content of these two substances in oregano grass is very high. Oregano oil is used as a substitute for antibiotic additives. The use in feed will become more and more widespread. At present, the ingredients and content of oregano oil additives with significant effects (such as Zhi Duoxing) have begun to be accepted by animal husbandry technicians. With people’s attention to food safety, the application of oregano oil in livestock and poultry breeding Will become more and more widespread.